Title: Fervent
Author: Gemma James
Series: Condemned #3
Release Date: April 30, 2015
Synopsis
I never imagined things could get worse, but they do. The men who took us show no mercy. They won’t stop until they’ve destroyed Rafe for something he has no memory of, and I’m their weapon of choice.

Tortured and defiled, they make me wish I was back in that cabin where death was favorable to drawing another breath, but our captors can’t break what’s already broken.

What scares me is the madness I see festering inside Rafe. I’ve taken his freedom, his career, his reputation, yet despite all I’ve done, he’s determined to fight for me, kill for me, give everything he is for me.

He’ll even die for me.

NOTE TO READERSFERVENT is a new adult dark romance with disturbing themes and explicit content, including sexual scenes and violence that may offend some. Intended for mature audiences. Part three of the CONDEMNED series. This is not a stand-alone read! Please begin with TORRENT and RAMPANT, otherwise, FERVENT might not make much sense.

I DO BELIEVE I JUST DIED A LITTLE

Well, I’d like to tell you that this was wrapped up in a pretty little nutshell… BUT I CAN’T!!!   I can’t even hardly breathe after this mayhem and bedlam. Gemma does an bang up job of sucking your ass in (AGAIN), chewing you up, and spitting you out so your insides are like a pile a goo! Rafe and Alex’s story is one of havoc, turmoil, and disorder, but rest assured, Gemma just needs to drag us through the mud a little while longer before she concludes this dreadful tale.

Rafe is still suffering memory loss and I’m fairly certain I wanna kick him in the head until it comes back. I’m not saying that I don’t like the Rafe that’s kinder and gentler, but I do (with all my nasty tainted heart) miss that sinister and destructive Rafe that wants to hurt Alex (in a good way) and in turn hurt me! Ahhhh… so good!! Rafe is faced with so many hindrances in this book not only for himself but for Alex.   What will he do? How will he save himself this time and more importantly, how will he save Alex from herself? So many questions, so little time.

Alex is one tough cookie. Rapes, beatings, and torture are just scratching the surface of what she needs to deal with. Death almost seems like a welcome mat in her world!   I cringed every time I saw “Alex” at the top of the chapter heading. I knew some bad shit was coming down the pike and I wasn’t sure my soul could handle anymore. This girl would sell her soul to the devil before she’d ever give up on Rafe. Now that’s love people.

The supporting character cast in this book is mostly made up of villains and creepy people.   Not really sure I wanna mention any names cause that would give some good shit away… but know this… People are not who you think they are… So many faces on one person. So, much hatred and disgust emanating off our villains in waves. So much death, so much pain, and so many shocking revelations that I am biting my fingernails down to the bone until Gemma gives me that last installment so pleasantly titled Vagrant!

This was fast paced with dialogue that even made me blush. The main characters have become a part of me and therefore their every move and each word has become my main concern. Fervent is dark and disturbing. You won’t want to put it down till you’ve uttered it’s last words.   Trust me… I chain smoked, I drank on a weekday, and I ate tons of chocolate to get me through this one!   Bravo Gemma, you seem to know right where to hit me!! Muah… I loved it! 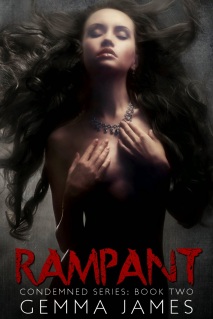 She lives in Oregon with
her husband and their four children—three rambunctious UFC/wrestling-loving
boys and one girl who steals everyone’s attention.