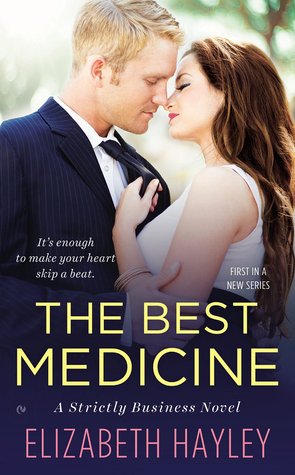 Lauren Hastings is finally ready to enter the real world. At twenty-six, she’s about to get her master’s in psychology, and she’s well on her way to beginning the career of her dreams—until she suffers public humiliation and has to endure something she thought she’d never have to deal with again: a part-time job.

A gig at Trinity Hospital isn’t exactly Lauren’s definition of a good time, but Dr. Scott Jacobs quickly changes her mind. He’s straight-up gorgeous, and he always gets what he wants. And that includes Lauren. It’s an ideal arrangement for both of them. No strings. Just fun—at least at first.

But feelings quickly begin to run deeper than either Lauren or Scott is willing to admit, causing issues neither of them want to confront. After all, who wants to risk the perfect relationship on something as terrifying, as messy, and as unpredictable as love?

This story was nothing short of brilliant. It was comical, heartbreaking, and unexpected. I have always loved Elizabeth Hayley’s books, and this one is no different for me. It took me on a wild ride. One I wasn’t sure I wanted on but once completed I was thoroughly sated and wanted to talk to someone about it right away.

Lauren was absolutely incredible. I loved everything about her. Her wittiness, her charisma, and ability to see the good in almost everything. Sometimes she seemed to be at the wrong place at the wrong time but made the most of every situation. She’s a 26 year old grad student finishing up with the psychology of intimate relationships. How fitting! As far as I’m concerned, she could have taught that damn class. When she has to go work with her mom at Scott’s office to pay for a past mistake, things start to heat up and get even funnier if you can imagine that. The connection between Lauren and Scott is almost immediate from their initial meet. The first cafeteria scene had me literally laughing so hard I was tearing up… Scott: “Did anything happened to him?” Lauren: “Yeah, I kicked the shit out of him.” Scott: “Who was this guy? A blind midget?” Bwahahaha.. funny shit! Lauren is by far my favorite character in this tantalizing tail.

Dr Scott, very “Doogie Howser”, was a close second for my favorite character. He’s a very troubled soul and his motives are questionable. However I fell hard and fast for him! He is a typical alpha male with a distressed past and lives his future based on bullshit if you ask me. He tries to come off calm, cool, and collected but something about Lauren rattle his cage in more ways than one. It’s like everything he is and everything he strives to be is constantly debatable when Lauren is around. He maintains that he doesn’t chase women, that they chase him but funny how that rule does not apply to Lauren. I have to admit being around Scott would definitely made me a stage 5 clinger!

The supporting character cast is by far one of my favorites. Lauren’s girlfriends, Simone, Cass, and Quinn are some of the best gals in the business. They seem to be there when she needs them but also gave her legroom when she needed it. Scott’s brother and friends are equally as good. I certainly would not mind hanging out with any or all of them at Nothing Gold! Now for Susan Jacobs, Scott’s mother… That woman got on my last damn nerve. The one thing that I felt was missing from this story with the confrontation that needed to happen between Scott, Tim, and their mother. I hate when people sweep things under the rug and stay in denial rather than face the music head on.

To wrap this up, I have to say that this story was powerful and what these two writers trying to accomplish hit the nail on the head. The characters were extremely relatable and felt very realistic. The dialog flowed with hilarity and easy. The writing style was effortless to read and it has to be said that the tension leading up to the climax was superb. The scene in the filing room where Scott broke my heart will live with me forever. The pacing was perfect and I enjoyed it immensely.

ARC provided by the publisher & author for an honest review

Elizabeth Hayley is actually “Elizabeth” and “Hayley,” two friends who love reading romance novels to obsessive levels. This mutual love prompted them to put their English degrees to good use by penning their own. The product is Pieces of Perfect, their debut novel. They learned a ton about one another through the process, like how they clearly share a brain and have a persistent need to text each other constantly (much to their husbands’ chagrin).

Elizabeth Hayley’s writing motto is best captured by the words of Patrick Dennis: “I always start with a clean piece of paper and a dirty mind.”