Doe has no memories of who she is or where she comes from.

A notorious career criminal just released from prison, King is someone you don’t want to cross unless you’re prepared to pay him back in blood, sweat, pu$$y or a combination of all three.

King’s future hangs in the balance. Doe’s is written in her past. When they come crashing together, they will have to learn that sometimes in order to hold on, you have to first let go.

Warning: This book contains graphic violence, consensual and nonconsensual sex, drug use, abuse, and other taboo subjects and adult subject matter. Although originally slated to be a standalone, KING is now a two part series. 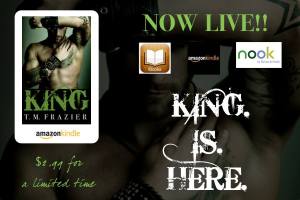 Breathe… in… out… in… out… T.M. Frazier… I hate you!! No, that’s not right… I love you… err… I mean I wanna beat your ass and then hug you… yeah… yeah… that’s it!!!! You nearly killed me with this. I have to admit, I was a TM Frazier virgin until this book… and holy freaking hell… that was one hell of a “cock” to take in on my first try!! How can a work of fiction feel so real? How can you get inside my head and stir shit up with only words? How did you get to my soul and turn it to mush? Simple… you gave me KING!

This book is bursting with raw emotion. From one page to the next, your emotional state will be one of hysteria and bedlam. I’m still not sure I know my own ass from a hole in ground at this point! This is one of those books that you just CAN’T put down for the life of you. You’ll be up till the wee hours of the morning because your crazy self won’t be able to stop! This is a cliffy people so beware! I absolutely loathe those, but for TM I’m sticking around to find out what happens next. I’m waiting patiently for Tyrant! Well, not really patiently… more like on the edge of my damn seat, chewing on the nubs that used to be my fingertips!

The main characters, Brantley King and Doe are utterly stunning. They’re like fire and ice, but seem to fit together like two lost puzzle pieces. Doe is a girl with no memory of who she really is or where she came from. All she’s concerned about is where her next meal is coming from, where can she safely lay her head for the night, and taking good care of the girl she once was incase that girl shows back up and wants her body back. I have to admit, her sense of humor through all this shit was remarkable. I woulda curled up in a ball and died…

“Why don’t you just gut me, and get it over with? Do whatever it is you want to do to me. Hit me. Fuck me. Fucking KILL me. Just. Stop. HURTING. Me.” ~Doe

King has recently been released from prison, but doesn’t come out as the same man who went in three years ago. When he finds Doe’s friend, Nikki stealing from him… well… shit is about to get real. Don’t get me wrong, he’s rude, he’s mean, and he’s all about the sex, drugs, and rock ‘n roll, or so it would seem, but something has changed. Something has altered his perception of right and wrong. He’ll sometimes make you think he’s on the right path and just when you want to hug the ever loving life outta him, he’ll do something so crass and evil that you’ll sit back and wonder what the fuck just happened.

The supporting character cast in the book is phenomenal. Samuel Clearwater a.k.a. Preppy is the love of my life! I want this man with my entire being! He’s exceptionally witty, good natured, and has this mysterious persona that makes you wonder what goes on behind his bedroom door. This guy has seen more violence than a boxing ring, but you’d never know it! He’s carefree and quirky and he wears bowties and suspenders. God I love this man. Now Bear on the other hand is your typical scary biker. Don’t mistake me, he’s got a heart of gold, but only when you’ve earned it. I liked his character. He always seemed to chime in when the voice of reason was needed. Our villains… well, I’m not sure I can name them, I’m not even sure they ARE the villains, but know this… a wolf in sheep’s clothing! That’s all I’m gonna say on the matter!

“Don’t get all fucking butt hurt about it, Bear. King doesn’t even trust me around her, and I only wanted to take her out on a date, and maybe put the tip in a little, but noooooo.” ~Preppy 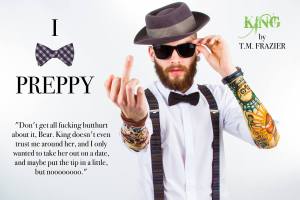 To say that this book changed my life would be an understatement. I felt everything these characters felt. I needed to be them, to experience what a tragic life is like on the other side of the tracks. TM made sure that I not only read about these people’s life, but I lived it. This book was effortless to read, the pacing was spot on, and the dialogue flowed with efficiency and expertise. The entire 254 (Kindle verison) pages was a huge build up to an enormous cliffhanger. A good one… but a cliffhanger none-the-same.

Hurry TM… hurry… get us that follow up quick before I wither and die!

ARC provided by T.M. Frazier for an honest review… I honestly think she secretly wants to kill me!!!

T.M. Frazier resides in sunny Southwest Florida with her husband and baby girl.

In the third grade she wrote her very first story about a lost hamster. It earned rave reviews from both her teacher and her parents although her spelling could have (and could still) use some help.

It only took her twenty years to start the next book.

The Dark Light of Day was her debut novel.

She LOVES talking books with her readers.