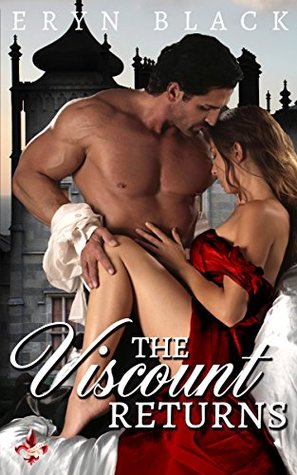 Eight years away to seek his fortune, Lord Robert Edden, the Viscount of Carlton has returned to find his estate transformed and his young bride a grown woman. There is little he can confess to his wife of his years away as he demands answers from her for the misuse of his lands as he has been away. Robert had left as a young man eager for adventure, but he has returned to his wife a Viscount ready to claim everything, including his bride. After so much time passed, would she welcome him with open arms or cast him out of her bed? As master of the house would he find his place or seek the next shooting star to chase across the ocean?
Married at a young age and abandoned on her wedding night, Fiona has spent the last eight years working on the lands her husband had left behind with no expectation of his return. For eight years she had been haunted with the memories of that one night they had shared in her bed. With so much time passed is there hope that she could once again open herself up to the man who had abandoned her and would he be able to accept the consequences of their one night together?

**Content Warning: This story contains adult language and sexual situations, including M/M. It is not intended for anyone under the age of 18**

He smiled, remembering how scared she was when he came to her on their wedding night. She was in the very bed that she lay in now, with her coverlet pulled tight to her neck. Ready to get the whole business over when he rushed to her side, he pulled the coverlet back with force. Looking back now it was perhaps the wrong tactic to take. The intention was to make it quick and meaningless, just as he expected the rest of their marriage to be. He did not hesitate to take her maidenhead nor pause when she cried out in pain.
There was no denying that he had been a bastard to her that night. But then something changed and she came alive in his arms. Moving together their bodies spoke to each other and something changed between them that he had not expected. Their climax was in harmony and he was suddenly taken away to their many years together, of children and happiness. That was the moment he had made his decision, if he was going to make his escape and find his fortune he had to do it soon before he fell in love with her. He had been a coward. A knock at the door awoke Robert from his dream. He answered the door with admittance before hearing who it may be. Turning to the sound of a guttural sound, he saw Allen peering around the door. He had a sheepish cock to his brow and waited for Robert’s reply, which was quickly answered with a nod. Stepping in, he closed the door behind him. “Allen, I am sorry about what we have found here. I never expected—” Extending a hand before him, Allen silenced his friend. “Please, do not trouble yourself. I know how hard you have worked and I have been there when you sent out the bank drafts home and I do not need to look hard to see what you had described to me so often. It is obvious some wrong has fallenon your family.” He stepped closer, but seemed to keep a distance. “With the knowledge of your son and the condition of your marriage I think that your family and your estate need you.” There was no avoiding the divide that was coming between them from honor and obligation. They had both been at fault for trying to escape the lives and birthrights they had both been born into, and Allen knew as well as Robert that it was time to put their adventures aside to take their obligations with both hands. It was time for them to grown up, and in doing so they had to put their friendship aside in exchange for the family and people who had been waiting all these years for them to return to England.
“I know.” His head fell forward. Robert was weakened by his failure.“The first thing I need to do is find what became of the fortune I have sent over the years and what became of my steward. I have yet to see him since I have returned and I am beginning to fear that I was the fool in all of this.”Crossing to the window with determined steps, Allen released a deep breath. “I fear I may add to your pains. I will not be here when you awake.” It pained him to tell Robert. They had been friends for nearly eight years and lovers for almost six. “I don’t understand? Is there something—” Risking a step, he was stopped by the look on Allen’s face. Looking over his shoulder, his brow was creased in pain. “Your wife needs you and you need to know your son. That box you stowed in your saddle bag may be a few years late, but it holds every intention you had in taking your rightful place.” Nodding his head to stop Roberts’s argument. “You have a family here that needs you and I am a barrier for you.” Taking hold of Roberts’s shoulders, he smiled warmly. “This is not goodbye for us…we shall meet again.” He pulled him into his arms, their mouths molded together, but Robert could not find the peace in Allen’s touch that he was used to. “I could never stay away from you for good.” Tilting his head with a correction. “With the approval of your wife, that is.”