“You see, Josslyn, murder is brash. It’s derived out of careless impulses, leading to a trail of mistakes and ultimately capture. It’s elementary and messy. But revenge … Revenge is entirely different, my dear. It’s methodical and gratifying. Revenge stews and festers as your mind has nothing to do except ingest the hate—to transform and become the hate. Revenge only seeks one outcome. It wants them to pay and pay dearly.”~Nikolai Petrov

To Nikolai Petrov, being a criminal was not a choice. It was a necessity. In and out of Russia’s deadliest prisons, he learned how to survive and ultimately flourish amongst the worst criminals the broken society has ever seen. He rose through the ranks, soon becoming a valued member of one of Russia’s most feared organizations—Vory V Zakone, Thieves in Law.

For Josslyn Stowe, growing up in a typical American household was not in her fate. She experienced her own tragedy after the murder of her father. Soon after, her life was set on a one track course, right down to her chosen profession as a third generation police officer. It did not take long for Josslyn to form a prestigious career. She owed her success to the unrelenting drive to do whatever it takes to capture the worst criminals.

It was the tragic murder of an unknown family that sent these two powerhouse individuals on a collision course toward their opposing fate. Their story soon becomes a cat and mouse thriller that will have you wondering if there is good versus evil, right versus wrong, and retribution versus justice. Or are we all merely a lesser version of those who stand next to us?

M.S. Brannon was born and raised in the Midwest. She still resides there today with her wonderful husband and son. When she is not writing or reading, M.S. Brannon spends time with her family, watching movies, and discovering new music. She writes romance because she believes love and heartache is the rawest emotion one can experience. 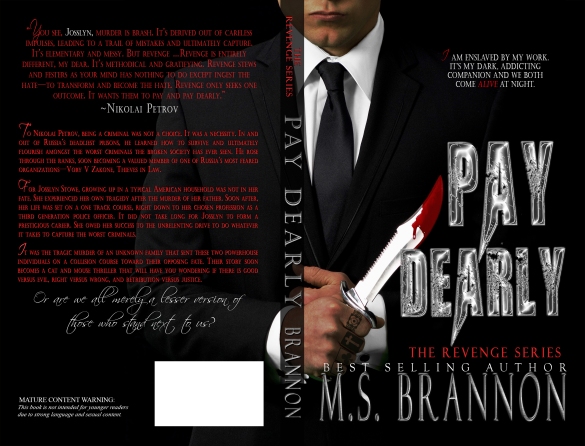