SYNOPSIS:
My love was thick.

Her faith was thin.

Somewhere in the middle is where life found us.

I claimed her when I was a boy.

I held her until I was a man.

She was my first thought every morning, my last smile at night, and a million memories in between.

Then one night, with her warmth still lingering on the sheets, Aly King walked away from me, from us, from our life.

They say time heals all wounds, but not for me.

Not when my heart is empty.

Not when there is nothing but a sea of meaningless faces wherever I go.

It always comes back to her.

Aly needs reminding of how drunk our love made us, before she forgets completely.

Before we lose our chance.

Before we are irrevocably broken. 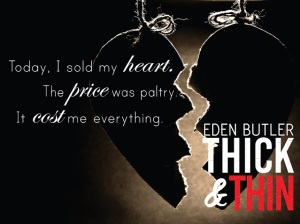 “You don’t want to remember?”

I didn’t. Not a single memory. A touch that was new, a taste that was different—that’s what I wanted. Memory came with emotion. It came with commitment, something that would land me back where I’d begun four years ago. I wanted to move beyond that. I wanted more.

He didn’t stop moving against me. Ransom wasn’t purposefully cruel. He thought he knew me, assumed he knew when I was pretending. But I wasn’t this time. I wanted him to give me what I asked for, not what he thought I wanted, not what I had wanted in the past. But he couldn’t do it. No, he wasn’t a stranger. He knew how close I’d come to climax. So he didn’t stop, only slowed before he moved his hips, release my wrist to pull my face up. And because I recognized how badly he wanted this, and knew that I would end up wanting it, too, I let go of wanting anything else and gave myself up to his touch, his fire, his desire.

“A stranger doesn’t touch you, Aly. Not like this.” And with that one touch, Ransom fractured the reserve I had tried so desperately to maintain. A push of my flesh, finger under my thong, right against my clit, bare, raw and that tactile, desperate urgency eased.

“A stranger wouldn’t know what you whimper when you want it, when you’re so close to falling apart that your breath becomes a muffle of sound.” He tugged at my pants, freed me from anything but the floor under me and his touch. His palm over my naked ass, then he pulled me against his body until he pushed his fingers inside me, working me hard, like no one but Ransom ever had. Ever could.

“No stranger would know that your breath hitches, that you hold everything still, the air in your lungs, even the beat of your pulse when I touch you.” He showed me then, with the dip of his fingers deep inside. And all did go still then—the breath between us, the axis of the world, my beating heart…it all seemed to stop until he moved his fingers over me, sliding until he found his way to a rhythm that made time coil and speed as quickly as it had slowed. Nothing held me back then. No excuses of why he shouldn’t touch me, no lies I told myself about not loving him anymore.

“I’m not a stranger, nani. Your body knows that.” Working faster, deeper, he smiled, pleased and happy when my mouth opened, when the space between us filled with the soft noises I made. His face wasn’t expressionless anymore. It told me all I thought I’d forgotten. The act of touching me, making me come, the noises I made, it was all familiar to Ransom. It was comfortable.

“Strangers don’t know love this deep. If they did, they wouldn’t be strangers at all.” That he whispered against my lips, kissing me like he couldn’t keep from it for another second.

“I’ll never be a stranger, Aly, because this body, your heart is mine. It always will be.”

is an editor and writer of Fantasy, Mystery and Contemporary Romance novels and the nine-times great-granddaughter of an honest-to-God English pirate. This could explain her affinity for rule breaking and rum.

When she’s not writing or wondering about her possibly Jack Sparrowesque ancestor, Eden patiently waits for her Hogwarts letter, edits, reads and spends way too much time watching rugby, Doctor Who and New Orleans Saints football.
She is currently living under teenage rule alongside her husband in southeast Louisiana.
Please send help.

The following goodies are up for grabs and are open internationally!