Skye Summers endured a tragic past. She wants what the past stole, and despite lingering scars, she’s surviving and thriving. Now she cures the sick, heals the wounded, and takes care of those clinging to life. The only person she can’t heal is herself, because Skye is too broken for love.

Ash Dean has it all: Fame, fortune, and the adoration of screaming fans. The constant parties, drugs, alcohol, and an endless string of one-night stands are taking their toll. He gives and his fans take, until he’s lost within the crowd. He wants someone to see him for the man he wishes to be rather than the one he’s become.

It would be insane to accept and Skye’s a fool to agree, but she’s tired of playing it safe.

It’s time to take a leap of faith, besides what could go wrong? 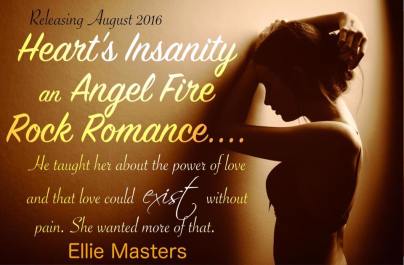 Ellie Masters has been exploring the worlds of romance, dark erotica, science fiction, and fantasy by reading and writing the stories she likes to read. When not writing, Ellie can be found outside, where her passion for all things outdoor reigns supreme: off­ roading, ATV-ing, scuba diving, hiking, and breathing fresh air, are just a few of her favorite pursuits.

Wife, lover, and mother are her most treasured roles, but Ellie has played many parts: counter-girl at McDonalds, a research assistant in a Nanofabrication facility, rocket scientist, physician, and now a published author with the release of her debut novel Changing Roles.

She has lived all over the United States, east, west, north, south and central, but grew up under the Hawaiian sun. Now, Ellie is proud to call herself a Southern transplant, learning to say y’all and ‘bless her heart’ with the best of them. She lives with her beloved husband, two children who refuse to flee the nest, and four fur-­babies; three cats who rule the household, and a dog who wants nothing other than for the cats to be his friends. The cats have a different opinion regarding this matter.

Ellie’s favorite way to spend an evening is curled up on a couch, laptop in place, watching a fire, drinking a good wine, and bringing forth all the characters from her mind to the page and hopefully into the hearts of her readers.