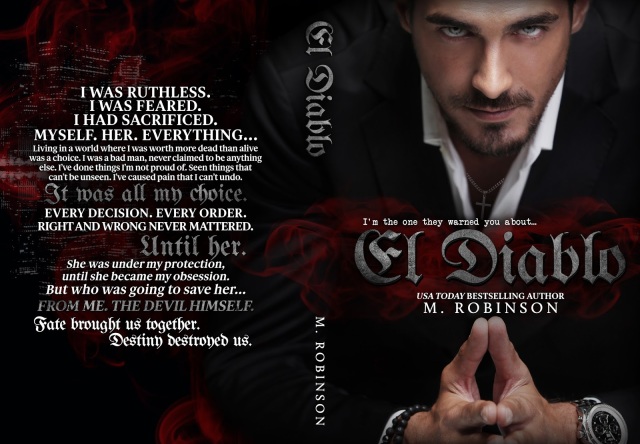 I was ruthless.
I was feared.
I had sacrificed. Myself. Her. Everything…
Living in a world where I was worth more dead than alive was
a choice. I was a bad man, never claimed to be anything else. I’ve done things
I’m not proud of. Seen things that can’t be unseen. I’ve caused pain that I
can’t undo.
It was all my choice.
Every decision.
Every order.
Right and wrong never mattered.
Until her.
She was under my protection, until she became my obsession.
But who was going to save her…
From. Me. The devil himself.
Fate brought us together. Destiny destroyed us.

Holy fucking hell! This is one for the record books. I just literally finished it about 10 minutes ago and I’m fucking reeling from this tale of woe and despair. When you sit down with the Devil make sure you have alcohol and tissues and possibly something to smoke! For real!

Alejandro (a.k.a. The Devil or El Diablo) is one fucked up man! He’s hot, he’s cold, he’s your worst fucking nightmare, and he’s your wettest dream. I was astounded at the life this man lived. From the age of fifteen his life became utter chaos. Life, Death, and violence are just a daily part of his life and he doesn’t even seem fazed by it. My god this man is killing me slowly and I think I may like it.

Lexi isn’t even the person I thought would be our female lead character. In fact for a time I honestly thought she might be a bit taboo for Alejandro. Bad juju kept running through my mind over this girl. I feel like I’m finally able to release the breath I’ve been holding for the past 48 hours. Ahhhhhh. This girl is one tough cookie. She stands up to the Devil and she loses more times than I can count, but she doesn’t let that stop her. I think I may love her just a little bit more than I love Alejandro… Just a little!

The supporting character cast is pretty fucking massive! I’ll start with my “hates.” I hated Alejandro’s father for everything he did and everything he stood for and for dragging our beautiful Alejandro into a condemning lifestyle without any disregard for his son’s life. I hated Michael for a multitude of reason, but to sum it up with this one, he just never made me feel a connection to him, I couldn’t grasp it, but I just know he’s not a good person. Now for my “likes,” God, I loved Amari and Sophia and Alejandro’s Momma. These girls put up with a ton of shit, but they kept up their chins, maybe for appearances only, but they did it. I especially loved the effect they had on Alejandro. Whether he knew it or not, those women played an important role in the shaping of his life.

So, you don’t need me to tell you this book was fanfuckingtastic, or that it’ll blow your mind. What I will tell you is if you don’t fit this into your future reading agenda you’re missing out on one of 2016’s best books. It’s heartbreaking and gripping. It’ll put you to the test in more ways than one. I’m not going to say there won’t be times when you want to throw it across the room and watch it shatter right along side your heart, but pick up the pieces and keep reading, trust me! The characters are so convincing, so persuasive that they’re lives will seem to become more significant than your own. The writing style is what it is… M. Robinson is good at writing an extremely angsty story. No stone left unturned, not one person’s life left unchanged, and through it all, the build up to the climax starts the moment you start reading it till you read “the end.” I loved it!

“Go stretch again, cariño,” I ordered in a dominant tone. Nodding to the barre.“I’m fine,” she stubbornly replied. Shaking her legs and arms out. Getting back into position, looking at me through the mirror.I cocked my head to the side, arching an eyebrow. She narrowed her eyes at me, but begrudgingly listened. I pressed play, allowing the melody to once again take over. She placed her leg on the lowest barre, making her ass stick out in my direction.
Tempting me.
She closed her eyes, needing to get lost in the music, wanting to push away all the negative thoughts, already feeling discouraged. I stood, taking off my suit jacket. Rolling up the sleeves of my collared shirt as I stepped onto the hardwood floor. I slowly came up behind her, catching her off guard.
She froze, turning around, opening her eyes. Peering up at me through her lashes. “What are you doing?”
I leaned forward against her ear, grinning. “I’m helping you stretch.” Getting down on my knees in front of her.
Her eyes dilated. The feeling of disappointment replaced with nothing but lust. She placed her arms out to the side, resting up against the barre, supporting her weight. I grabbed her ankle, lifting it up in the air, rubbing along her leg as it was fully stretched, before setting it on the lowest barre. Running my other hand up her side, easing her over toward the extended leg. She understood what I was doing, reaching for her ankle, stretching. Standing back up, bringing her arms above her head, I caressed along her leg again, casually turning her torso so her leg was still placed on the barre behind her.
Her breathing hitched as I touched her all over her lower body. My lips softly kissing the inside of her thigh to where she wanted my mouth the most. 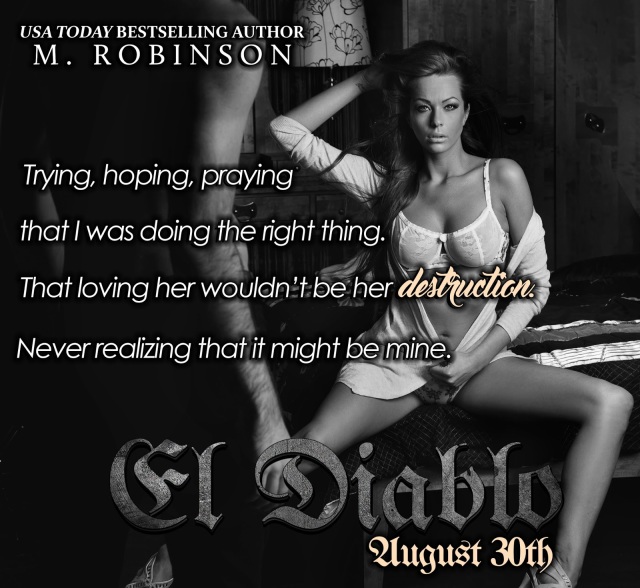 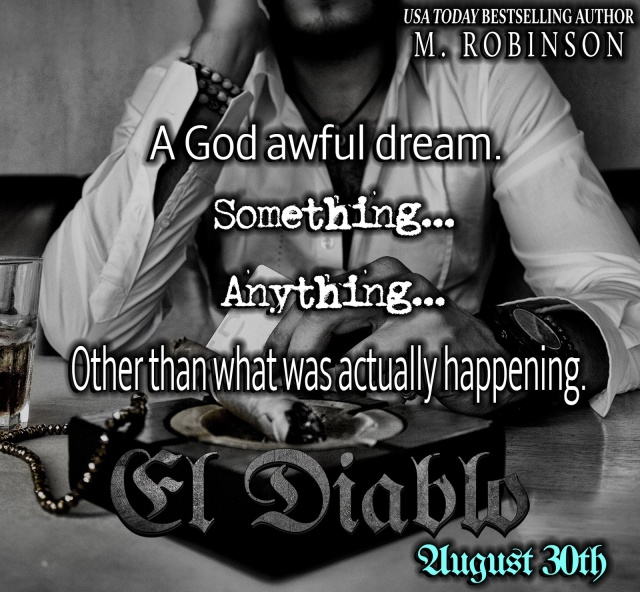 USA Today Bestselling Author of The Good Ol’ Boys Standalone
Series, The VIP Trilogy, Tempting Bad, and Two Sides.
M. Robinson loves to read. She favors anything that has
angst, romance, triangles, cheating, love, and of course sex! She has been
reading since the Babysitters Club and R.L. Stein.
She was born in New Jersey but was raised in Tampa Fl. She
is currently pursuing her Ph.D in psychology, with two years left.
She is married to an amazing man who she loves to pieces.
They have two German Shepherd mixes and a Tabby cat. 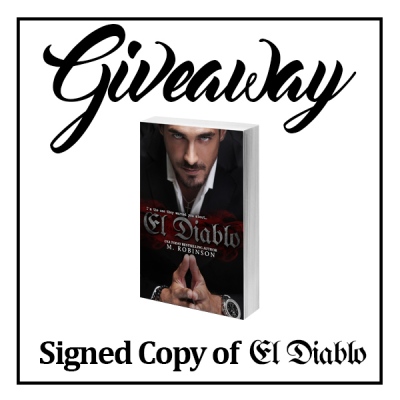