The Bow Tie is Back!
PREPPY by T.M. Frazier is LIVE!

He’s worked his way out from beneath a hellish childhood and is living the life he’s always imagined for himself. When he meets a girl, a junkie on the verge of ending it all, he’s torn between his feelings for her and the crippling fear that she could be the one to end the life he loves.

Andrea ‘Dre’ Capulet is strung out and tired.

Tired of living for her next fix. Tired of doing things that make her stomach turn. Tired of looking in the mirror at the reflection of the person she’s become. Just when she decides to end it all, she meets a man who will change the course of both their lives forever.

For most people, death is the end of their story.

For Preppy and Dre, death was only the beginning.

This is the fifth book in the King Series and it’s meant to be read after Soulless.

Preppy: The Life & Death of Samuel Clearwater, Part One
by T.M. Frazier
Samuel & Dre
“A BULLET WITH A SIDE OF BOW TIE”
5 Stars and then some 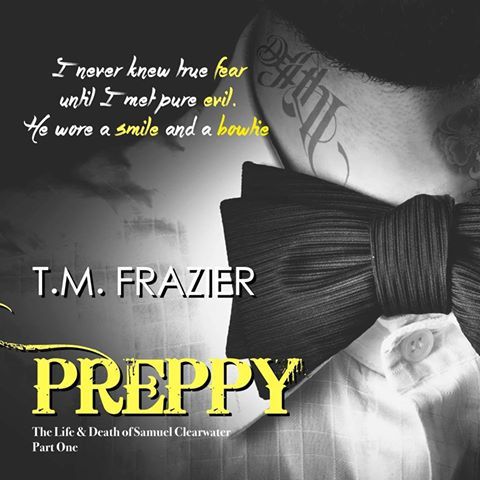 Wow TM, you nailed it with this one. I was intrigued to say the least when I learned of your intent to write a book about our beloved bow tie wearing, fowl mouthed, pot grower. I am not surprised that this one will be going on my top 10 of 2016. This is a book about so much more than it starts out to be. Of course we have the typical Prep, but there’s something much more profound. Something just below the surface, yet still so far out of reach. I can’t believe that this is the first part of the life and death of Samuel Clearwater. I. Am. Blown away, and can’t wait to read more! I never dreamed there would be so much to say about Preppy. I always thought of him as a side character… a supporting character, but holy hell.. He’s anything but!

Samuel Clearwater (a.k.a. Preppy) is such a complex character. He projects such a happy-go-lucky façade to all those he’s associated with. He makes you think life couldn’t get any better… but… it can and he knows that now. He’s seen and tasted the “good life.” A life that he could be part of, but God knows he’ll do what he can to sabotage it. Damn you Preppy, you broke me!

The supporting character cast is pretty decent. Mirna is Dre’s Grandma and not doing so well. Connor and Eric are two of the low-lifes Dre used to hang out with and get high with. These two can kiss my ass, twice! Bear is in this book and I’m not so sure I like him at the moment, but I think I may dislike Preppy even more! Ugh! I love him! I hate him! Help!

The storyline will grab you by the balls and keep you enthralled from cover to cover. I was drawn to Preppy and Dre’s story like a moth to a flame. I feel like I got to close… I got burned! The dialogue flows with proficiency and made me laugh out loud more times than I can count. The tension that TM created starts at the very beginning and built all the way to that crazy cliffy. Fantastic read!

“No! I hate you,” she spat, as I continued to tug her beside me.

“Good, you can hate me while I fuck you,” I said. “But first things first. My lesson obviously didn’t take in that brain of yours. You want what you want and I can’t stop you,” I said, as we approached the train tracks which were elevated on a mound of gravel several feet off the ground. The warning lights flashed orange, the neon reflective barriers dropped down to cover the service road, while the bells indicating an approaching train clanged away. “And since I can’t stop you, I’m going to help you out. Bullet in the head was so three hours ago. I’ve got something even better in mind now.”

“Wait. What?” she asked, her teeth chattering. “You…you wouldn’t.”

“Wouldn’t what?” I said, turning around to face her, almost losing my footing when I noticed the trail of dried tears on her cheeks. I looked away for a fraction of a second to regain my composure. “You think I wouldn’t kill someone?” I cocked an eyebrow. “You already know that I’ve been there, done that, bought the motherfucking t-shirt, doll.” Her eyes went wide and she made a move to step back. “Oh no, Doc, I read your letter and I saw what you wanted. And remember, I’m nothing if not accommodating.”

When I pulled her to climb the gravel mound her knees locked up so I bent over and picked her up by the waist, tossing her over my shoulder, carrying her onto the tracks while she beat on my back with her closed fists. When I got to the top I set her down roughly and she fell backwards onto her ass, bracing herself with her hands against the large pieces of gravel under the tracks.

The whistle of the train blew in the distance. It wouldn’t be long now. Dre made a move to stand up, but that wasn’t what I had in mind. I bent down and pushed on her chest, spreading her tiny frame across the tracks. I crawled on top of her, pinning her down with my thighs. I leaned over her, my chest to hers as we both breathed rapidly. She struggled underneath me to get up, pushing at my chest, but I wouldn’t budge. “Why the struggle, Doc? This is what you wanted, isn’t it?”

She glanced up at me as the train whistled again. Her gaze flipped to her right, where the single yellow light from the train emerged from around the corner, shining brighter and brighter as it chugged closer and closer. For a moment she stopped struggling, looking back and forth from the train to me.

“So what, you’re gonna die too?” she asked, hoping to appeal to my sense of self preservation.

I shrugged. “I get bored easily, maybe the devil will make me his errand boy or something.”

“Preppy, this isn’t funny. Get up and get off the fucking tracks,” she said, her concern shifting from herself to me.

I shook my head and yawned. She wiggled underneath me, and although there was a train barreling toward us my cock once again stirred to life. Maybe I should just rip down her panties and push inside of her. Train or no train, it would be one fuck of a way to go out.

“You have to choose, Doc,” I said, making my voice as serious as I was capable. “Life?” I asked, screaming over the sound of the train screeching against the track. I pushed my hard cock against her core and she gasped. Her trembling turned into a shiver, her mouth fell open. I glanced to the side at the blinding light of the approaching train as it bathed us both in a tunnel of light. I leaned down, so close that my lips were a whisper above hers, as I shouted, “Life? Or death? What’s it gonna be, Doc?” My hair blew around my face as the light grew brighter and brighter. “Answer the fucking question!” I demanded, my hands squeezing her shoulders, my fingers digging roughly into her skin. “DO YOU WANT TO FUCKING DIE?”

With only seconds left until we became shredded under the train, Dre closed her eyes and sighed. When she opened them again they were glistening, fresh tears spilling from the edges.

She started to speak, her lips forming the beginning of the word, but before it could fully leave her lips I stood, pulling her up with me. I lifted Dre into my arms and took a running leap off the tracks, my legs flailing in the air as we fell the seven or so feet. Dre’s decision still on her lips, her scream surrounding the air around us as we crashed down into the field.

ABOUT THE EVIL GINGER…

T.M. Frazier is a USA TODAY BESTSELLING AUTHOR best known for her KING SERIES. She was born on Long Island, NY. When she was eight years old she moved with her mom, dad, and older sister to sunny Southwest Florida where she still lives today with her husband and daughter.

When she was in middle school she was in a club called AUTHORS CLUB with a group of other young girls interested in creative writing. Little did she know that years later life would come full circle.

After graduating high school, she attended Florida Gulf Coast University and had every intention of becoming a news reporter when she got sucked into real estate where she worked in sales for over ten years.

Throughout the years T.M. never gave up the dream of writing and with her husband’s encouragement, and a lot of sleepless nights, she realized her dream and released her first novel, The Dark Light of Day, in 2013.

Visit her at www.tmfrazierbooks.com for news, information, and appearances.